As current and former students of CIEE Thailand, a U.S. study abroad program, we know Na Nong Bong villagers as our host families and as our teachers of development issues and human rights. Along with Dao Din, a group of active Thai university students, we have witnessed and followed the situation there for nearly a decade. We have seen that the mining company, Tungkum Ltd., and the Thai government have chosen to actively suppress the voices of those resisting the mine, rather than respond to villagers’ requests for restoration. The company has plans to expand to over 100 more sites in the area.

In May 2014, over 200 men attacked Na Nong Bong villagers who had been guarding their homes, and the community became further isolated under martial law. The severity of the situation inspired us to come together to create the Mining Resistance Campaign. The first part of our campaign is this project, which will send Na Nong Bong villagers and their allies to Mexico for a 12-day educational exchange with Oaxacan communities who are also resisting large-scale mining projects. This exchange will lead to sustainable community development strategies to improve the movements in Northeast Thailand and Oaxaca, Mexico.

Support educational exchange for community leaders resisting a gold mine in Northeast Thailand.

Communities in the area have continued to experience negative effects in the surrounding environment since the opening of the Tungkum Ltd. (TKL) mine in Northeast Thailand. In 2006, local water sources were reported to be contaminated with cyanide. Villagers can no longer use their local water sources and fear eating food grown locally.

Health problems among community members, such as skin rashes, respiratory ailments, prolonged colds, and eye pain have become much more prevalent. While the Thai government and TKL have insisted that environmental and health effects are unrelated to mining activities, villagers have come together under the name of Kon Rak Ban Keud (People Who Love Their Hometown, PWLTH) to monitor the effects and spread awareness of the rights violations.


Our solution is born out of our values of people-to-people exchange, collaboration, and cross-cultural education in order to achieve long-term, worldwide grassroots change. The tour to Mexico is an essential project leading to the strengthening of an international response to violations of community rights. Ultimately, it is this international response that will force the mining industry to refrain from further violence in any form.

The exchange in Mexico is the center of this project in which building connections is the ultimate goal. The exchange will culminate in an international conference that will bring together human rights, environmental, and mining justice organizations from around the world to create collective strategies and alliances. We've already seen connections start to happen in the following ways:

Through workshops and visioning surrounding this project, it has become clear that the delegates are going as representatives of Thailand’s grassroots movement for autonomy over community resources and not as individuals. Upon returning from Mexico, the post-exchange activities are designed to impact numerous communities and organizations within Thailand by spreading pragmatic tools and inspiration for nonviolent organizing.
Fundraising itself has brought the issues of Na Nong Bong into daily conversation with everyday people in Thailand through tabling at markets. A common response to development projects in Thailand is, "There's no way to stop it." We've been able to respond and explain that communities have stopped certain large-scale development projects for decades.
A documentary film is another essential part of this project. Distribution of the film through social media and screenings in communities throughout the U.S., Thailand, and Mexico will maximize the visibility of the campaign, ensure an increased awareness of mining-related injustices, and foster support for resistance efforts.

Outreach has brought us closer to being able to tell the story of Na Nong Bong. From videos to profiles to graphics, this project is bringing together old and new resources. The world can no longer claim ignorance.

Networking with mining and human rights organizations worldwide. The list of contacts in different countries continues to grow. Na Nong Bong is clearly not alone. These organizations are becoming allies in achieving our common goal. 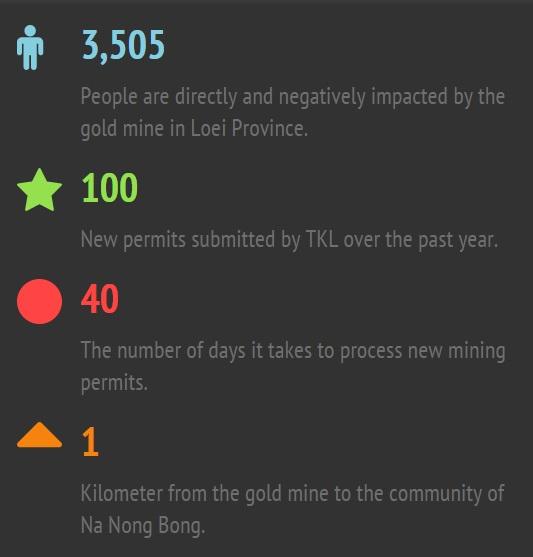 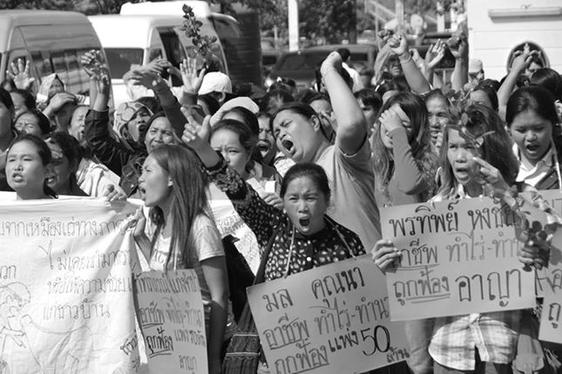 PWLTH has organized protests and rallies, taken their case to the administrative courts, and received support and legitimacy from international organizations, such as Human Rights Watch, Amnesty International, and Protection International.

In 2014, PWLTH and villagers were desperate to ensure that the illegal mining operation would end. They constructed and guarded barriers on the main road leading to and from the processing plant. These barriers led to multiple conflicts between the villagers and mining company. On May 15, 2014, which is now known as the “Black Night,” hundreds of armed men cut electricity off from the village, attacked community members who had been guarding the walls, and took some hostage. Villagers were returned to the community bruised and beaten after trucks illegally moved ore from the mine. No one has been held accountable for the attacks.